My cooking club theme this month was cinnamon, and every dish was great. We had pork tenderloin cooked with apples and cinnamon, cinnamon spiced sweet potatoes, and a Persian grain salad with cinnamon and cilantro.

I made these granola stuffed apples for dessert, using my first batch of homemade granola. It was a very simple recipe, although coring the apple with a knife was a little tricky. After the apple is cored, you just stuff in the granola, top with butter and cinnamon, and bake in the oven until soft.

While the apples were good, I think they would have been even better if they were baked just a little longer, and then topped with ice cream. For some reason, they just seemed a little too ‘plain’. But if you’re looking for a simple dish, then give this a try. 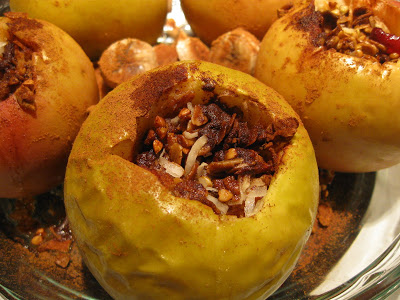 One thought on “Granola Stuffed Apples”