Before “soup season” really winds down, I wanted to try this recipe for Miso Soup with Sweet Potato Dumplings. I even bought my very first bottle of miso for the occasion! Ideally, you would start with a sweet potato which has already been baked since that would save a lot of time. I followed the recipe as written, although I left out the edamame. I closed the dumplings as best I could, sealing the edges with a few drops of water.

As other recipe reviewers noted, the soup itself is a bit lacking, but the dumplings are fantastic. I definitely added more miso at the end to try and give the broth some extra flavor. Next time I would consider adding a few mushrooms as well. My biggest disappointment though is that the leftover soup did not hold up in the refrigerator; this is a meal meant to be enjoyed right away. 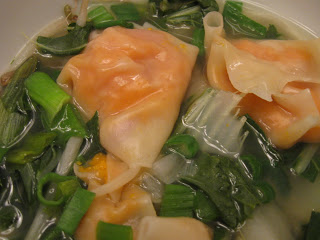