I am quite late to the Internet party celebrating this bread; I actually stumbled across the concept when looking for recipes for the Le Creuset-like pot I got for Christmas. The original recipe which started the craze was published in the New York Times in 2006. However, the best review of the recipe, including several reader comments, is from Smitten Kitchen. She also walks you through the conversion of regular active yeast to instant, just in case that’s what you have in the house already.

While this recipe does not require kneading, it does require a fair amount of elapsed time. So I started late Saturday afternoon by mixing the flour, yeast, salt, and water in a bowl. I covered it with plastic wrap, and thought that bread making seemed pretty easy. It was even working while I slept!

On Sunday morning, I decided to tackle the next step. There’s a lot of talk about the dough being wet, and when I poured it onto a 12″x8″ plastic cutting board to rest for 15 minutes, it was indeed sliding all over the place. Good thing there was plenty of flour on the counter as well. This is not a No-Mess bread.

Then it was time to turn it onto a floured towel for the second rise. There was no way I could form the dough into a ball; I practically poured it onto the towel. Many people who’ve made the recipe suggest using either a plastic mat, parchment paper, or a flat bottomed bowl instead of the towel and I will definitely try this next time.

Two hours later, I didn’t think the dough was appreciably bigger, but went ahead with the next step anyway. I heated up my pot to 450F, minus the knob which cannot withstand that temperature, and somehow got the dough from the towel to the pot. I baked it as the recipe indicated and here’s what came out of the oven. 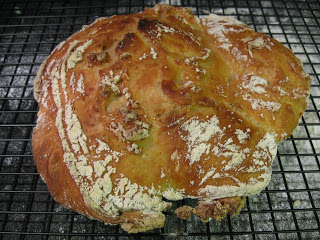 A little flatter than a typical loaf, but not too bad looking. Other people who’ve tried the recipe recommend baking it in a smaller dish to get a higher loaf, and I’ll try that next time too. But now for the real test – how did it taste?

The taste is good, more like sourdough than traditional Italian bread. This bread is definitely crusty, mostly in a good way, but because it’s so flat there is almost too much crust in each bite. Unfortunately, like all fresh bread, it doesn’t last long and was almost too chewy by the evening. I will try this recipe again though, and make some modifications including substituting some whole wheat flour.

I recommend you give this a try, even if (especially if) you’re a little afraid of making homemade bread. It’s a low cost experiment, and there is nothing like fresh bread still warm from the oven. This review is good as well, describing how to make this bread in less time and listing different baking dishes than can be used.

And I found the perfect recipe to use up the rest of the loaf (and no, it’s not French toast…)