Sorry to leave you all hanging last week, but I just couldn’t keep up with everything. I even ran out of milk to make oatmeal. 😦 There were salads from Whole Foods, sandwiches from Subway, and a lot of Starbucks coffee. But finals are over, and I figured it was appropriate to start the week with a new take-out option that I recently discovered.

~~~~~~~~~~~~~~~~~~~~~~~~
I admit, I snubbed my nose at Uno’s for years. All I could remember was greasy deep dish pizza that left me feeling uncomfortably full for hours. Even the salads on the menu didn’t offer a balanced meal. Plus, it’s a chain, and I’d much rather frequent smaller local establishments. But one night, fate brought me back. It was fairly late, I hadn’t eaten dinner, and I was on my way home but knew that the cupboards were just about bare. I thought about my options for takeout, but there aren’t many places that serve food late at night near my house. I spied Uno’s, and decided to give it a shot.

I was immediately greeted by a friendly hostess. I asked if they were still open, and she assured me they were. Then I realized just how many people were there enjoying a meal! She told me they could prepare anything for takeout, and that I should relax and take a look at the menu. This menu was a lot different than the one I remember! Yes, they still serve deep dish pizza, but they also have thin crust pizza, with a multi-grain version available. There were a lot of other options as well, but I decided to try a half pizza – the Roasted Eggplant, Spinach, and Feta on a multi-grain crust. It was less than $5, and the staff even served me a complimentary beverage while I waited.

When I got home, I dove right in. The crust was nicely crisp, and the toppings consisted of more vegetables than cheese, just the way it should be. The eggplant, spinach, and tomatoes were really the highlight. There was nothing greasy about this pizza. I know I was hungry, but the pizza was good! Just to make sure I was right, I went back another night and ordered it again, and took proper pictures.
Of course, I would prefer to make my own whole wheat pizza at home. But Uno’s turned out to be a decent option when I was in a pinch, and I appreciate their newer selections. The staff at the Newton Corner restaurant was friendly and attentive both times I visited, and I am hoping to get back there again this summer. 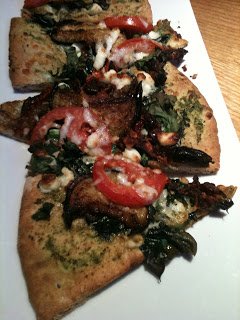