I tried this version of roasted brussels sprouts last year, but this time I added two new colorful ingredients – feta and sun dried tomatoes. First, I tossed about a dozen brussels sprouts, halved, with some olive oil, salt, and pepper, and roasted them for about 20 minutes at 375F. Then, I added a handful of chopped sun dried tomatoes and a quarter cup of feta cheese, and baked them for another 10-15 minutes. 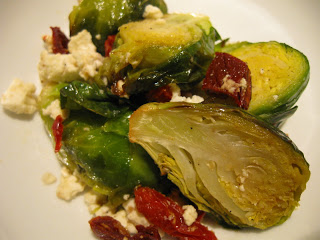